Two brothers clean up… the history of Heraklion

An important cultural initiative has been developing over the past two years in Heraklion. In spite of the economic crisis, 2 local businessmen show their love for  civilization and everyday life of their fellow citizens.

These are the well known hoteliers, the Logiadis brothers, who undertook the major task of preserving and restoring more than 70 statues, monuments and busts of Heraklion. The work of restoration and preservation was commissioned to sculptor George Roussis.

The conservation initiative began about two years ago when the Logiades brothers, George and Yiannis, wanted to give something back to the place they were born. The aim is to highlight the statues both for the upgrading of the urban environment and the everyday life of the inhabitants of Heraklion, as well as for the tourist promotion of our history and culture.

Overall, the statues to be preserved are around 70 throughout the city. For example, the statue of Eleftherios Venizelos, the bust of Nikos Kazantzakis and the marble Andrianta – known as the Monument of the Unknown Soldier – all in Eleftherias square, the statues of Erotokritos and Aretousas in Kornarou square, the marble bust of the fighter Giannis Daskalogiannis at the square which carries the same name, the bust of the great Nikos Xilouris at Kounouria Porta.

According to the sculptor and conservator, Mr. George Roussis, who moved from Athens to Crete specifically to undertake this enormous conservation task, they have already been restored: five large marble busts around St. Minas, the Lassithi Patriarch Meletios Metaxakis, the bomb from the Second World War, which is exposed to the north of the temple of Agios Minas, as well as many brazen busts.

The work of rehabilitation progresses gradually as weather conditions often do not favor the course of this task. “We prefer seasons that are not rainy weather, they do not have frost or heat,” says Mr. Roussis at neakriti.gr. While closing down on this excellent initiative it is a “job that wants love, effort and the right materials”. 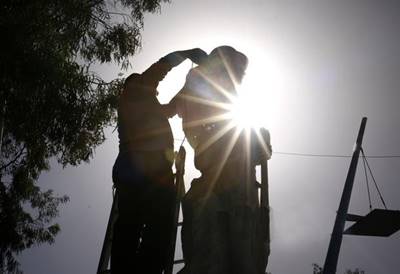 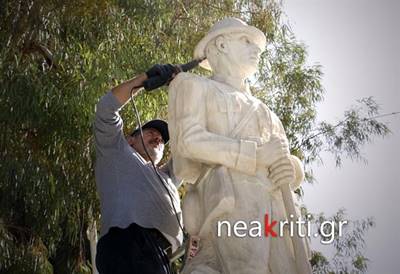 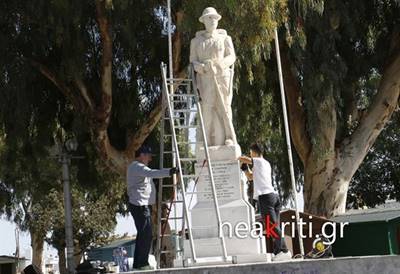